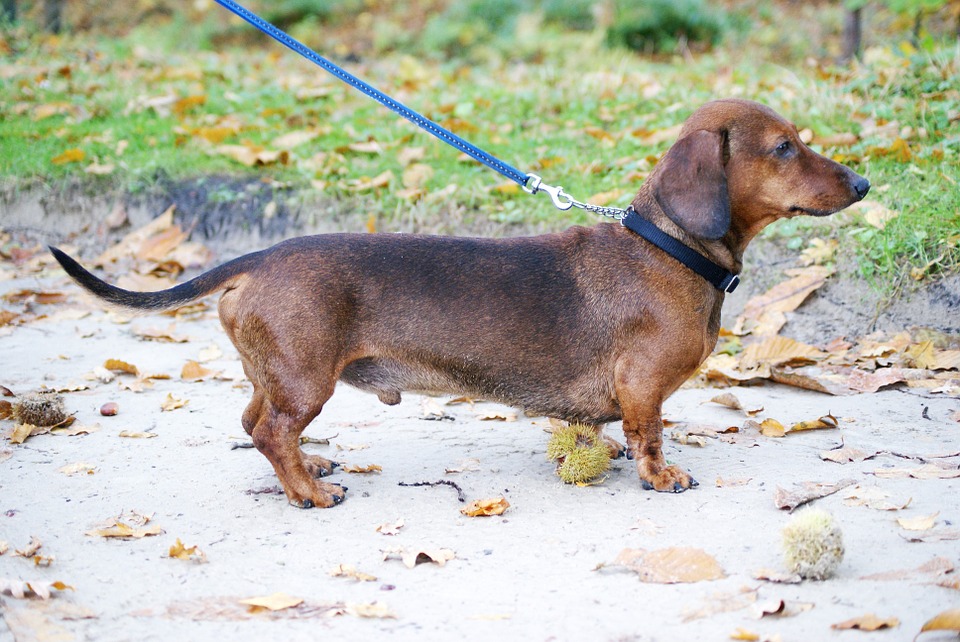 Known as the “wiener dog”, “hot dog”, and “Doxie”, the Dachshund is a popular small hound breed. Easy to train, affectionate, and playful, this lowrider is an excellent family companion. It’s not all fun and games with this miniature hunter, though, this is a sensitive dog with a tendency to bark, and an extreme wariness of strangers.

The History of the Dachshund

The Dachshund is most often recognized as a German breed. When the American University in Cairo discovered the remains of what looks to be a predecessor of the Dachshund in Egyptian burial urns, however, this theory was called in to question.

The German Dachshund or “badger dog” was bred and used specifically to hunt badger, but they also excelled in hunting rabbit and fox. These original Dachshunds were quite large, weighing up to 40lbs, and could even hunt down wild boar when used in packs. Over the years, however, the longer legged, heavier Dachshund became a lighter and lower dog.

The process of “shrinking” the Dachshund began as a method of replacing miniature Dachshunds. Miniature Dachshunds were being bred to hunt animals living in smaller burrows, animals like the European hare. The problem was, however, that in order to get smaller Dachshunds, the larger Dachshund was being cross-bred with other small breeds. This cross-breeding diluted the natural character of the Dachshund and limited their ability to hunt successfully. When breeders realized that the answer didn’t lie in crossbreeding, they focused instead on producing smaller Dachshunds through selective breeding instead.

Despite their lack of hunting talent, miniature Dachshunds saw a resurgence in popularity as smaller dogs became more popular. This popularity is due both to the smaller homes in which many of us live in due to overpopulation, as well as the fashion of accessorizing with small dogs.

The Dachshund weighs between 16 to 33lbs and stands between 8” to 9” at the shoulder.

The miniature Dachshund weighs under 11lbs and stands between 5” to 6” at the shoulder.

Dachshunds that fall between 11lbs and 15lbs are referred to as “tweenies”.

The average lifespan of the Dachshund and miniature Dachshund is between 14 and 17 years old.

Unfortunately, due to the physical build of this breed and a prevalence towards obesity, older dogs often experience lameness, paralysis, and disc degeneration. These problems can become significant enough so as to require euthanasia. 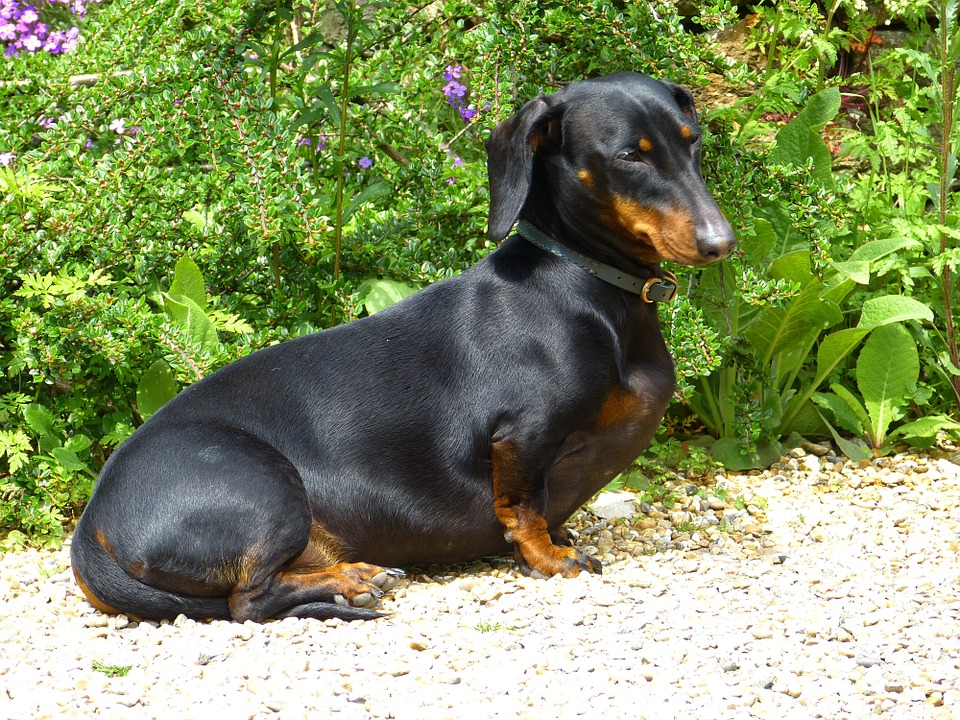 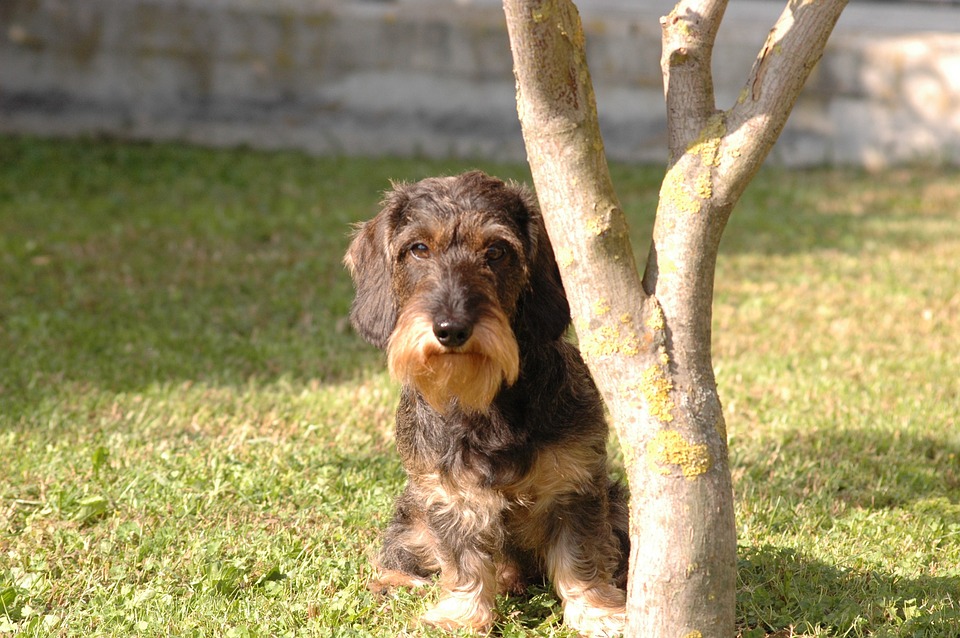 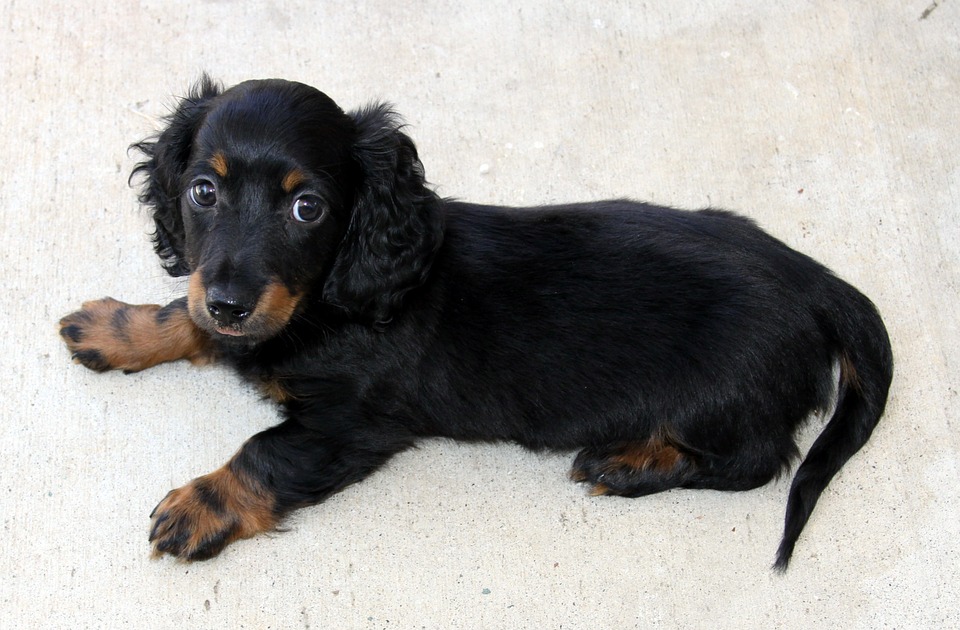 Common colors for the Dachshund include chocolate and tan, red, black and tan, blue and tan, fawn and tan, and cream. Smooth coated Dachshunds can also have a mottled coat, piebald patterned coat, sable coat pattern, or brindle coat pattern. In addition to these varieties, the wirehaired Dachshund can also have a coloration that is referred to as “wild boar”. “Wild boar” refers to a coat that is a mix of brown, black, and grey.

Dachshunds are easily trained so long as they are being handled with consistency and patience. They are highly intelligent dogs, but they are also exceptionally playful and this can result in a shortened attention span during training sessions.

As mentioned above, the Dachshund is a very playful breed. This playfulness can often lead to mischief, however, if a dog is not provided with a daily walk as well as attention from their family members.

Compatibility with Children and Pets

Their higher energy level and playful nature makes the Dachshund a great companion dog for families with children. It is important to note, though, that due to their size, rough play can cause the Dachshund to become nervous and potentially snappy. This snapping can be avoided by teaching children to respect this small dog. Children must also be taught how to properly handle the small Dachshund in order to avoid injuring their delicate back. More info about this risk and other health issues can be found here https://www.wagpets.com/the-dachshund-half-dog-high-and-a-dog-and-a-half-long-with-a-heart-of-a-lion under Health section.

When it comes to other pets, the Dachshund does not do well with small animals. Bred as hunters, this breed is fond of chasing and tracking down smaller pets and may even go so far as to kill them. With other dogs and larger pets, the Dachshund is a middle of the road kind of breed. This is a dog that appreciates the company of another dog, but can just as easily live as the only dog in the household.

The Dachshund adjusts well to living in a small home like an apartment. Unfortunately, apartments don’t adjust well to Dachshunds. Due to their tendency to bark often and frequently, Dachshunds often disturb neighbors and result in problems for apartment owners. If living in an apartment, it is generally best to make use of dog sitting or doggy daycare services when you cannot be home to keep your dog from barking.

Obesity is a particular problem for the Dachshund, so it is important not to overfeed and not to feed table scraps. The amount of food that a Dachshund requires will vary depending on their weight and activity level, but on average it will run between ¾ cup to 2 cups daily.

Grooming for the Dachshund varies depending on the coat.

The smooth Dachshund requires a quick brush once a week to keep their coat healthy. This will remove dirt and dead skin buildup as well as stimulate the dog’s oil glands.

A Dachshund may be a smaller dog, but they have a great deal of energy and a playful nature. A daily walk and a couple of playtime sessions weekly will keep a Dachshund happy, but they also require mental stimulation. As an intelligent hunting breed, any toy or game that requires them to draw on their instincts will make for a happy dog. Try playing games like “hide and seek” or “find it” to keep your Doxie happy.